Natalie’s day 4 NTU evening update – we had a really good day today. We have switched off of the narcotics to a blend of Tylenol and Motrin, and are tapering off of the steroids. Natalie was able to get out of bed several times throughout the day, mostly assisted, but walked on her own to the therapy gym and later much further down the hall to have a bath. The swelling in her face is down considerably from yesterday.

A clear highlight of the day for us was opening up a care package sent by Stacey Nofsinger, a former and much-loved teacher who craftily coordinated building an album filled with pictures and letters from many of the teachers and staff who have worked with Natalie at Terra Linda and South Jordan Elementary schools. The album was beautiful, and the letters were all very touching – Angela was so touched that she was crying as she read the letters aloud to Natalie, and I had to read the last three because Angela was breaking up so much. Thanks to Stacey and John  Nofsinger, Mrs. Clayton, Mrs Kimber,  Ms Tamayo, Ms Sundell, Mrs Lilly, and Mrs Degn for some beautiful and fun letters for Natalie. 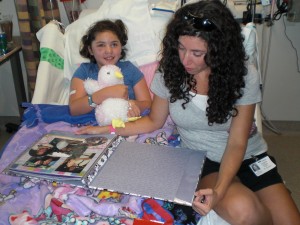 We also got visits from Elliot the Therapy Dog a couple of times during the day, which was another highlight. Elliot is a labradoodle, and he’s a big boy. Natalie must have had a heart attack when he jumped up on the bed and laid down next to her when they first met. He was gentle, he was well-behaved, he was endearing to Natalie. And he has the softest coat – Natalie was petting him and telling us that he felt soft like her blanket, and she wanted us to touch to compare. Elliot’s handler Joe is a good guy who makes rounds with Elliot 3 times a week to different hospitals as part of the Intermountain Therapy Animals program. I saw two other volunteers making rounds with pets on our floor, it’s an active program with incredible effect on the kids they visit. 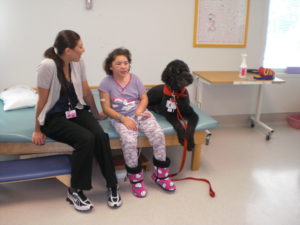 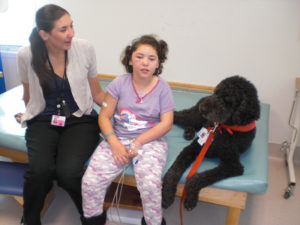 Dr. Kestle (neurosurgeon) and Dr. Van Orman (pediatric neurologist) both made visits with Natalie today. Both were pleased with Natalie’s progress, and Dr. Kestle suggested that we could be out of the hospital by Sunday based on how well Natalie was recovering. This is fantastic news for us.

Natalie is finally eating normal meals now. She was able to finish her lunch of chicken nuggets and french fries although I think the meal knocked her out (she slept for about 3 hours after eating); and also had most of her dinner where she traded her grilled cheese sandwich for a slice of mushroom pizza (and here’s a quick plug for The Pie Pizzeria who will deliver to Primary Children’s). She had some cookie during the morning, and some chocolate kisses from the Leals during the day. She is talking, giving us all a hard time and has made at least one butt-box reference, is making jokes so we think the old Natalie is finally back with us.