It was a good afternoon but I think we pushed it too much. The Leal’s came to visit, which was just awesome. 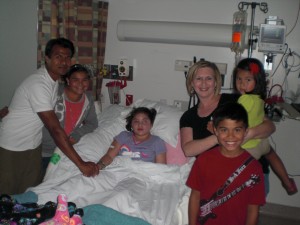 Natalie is resting again after getting her “dinner” of Sprite, Oxcarbazepine, Dexamethasone, Zofran, Zantec, an un-named laxative, and Motrin for the 101 degree fever. The real dinner went into the fridge. I’m really hoping this kid gets some rest and feels better again soon.

I guess 6 hours was a little too long after the first dose of Lortab.  The headache came back, so we’re going to follow a four-hour regimen from now on.  So far no seizures have surfaced after the surgery. I’ve been watching her heart rate pretty closely for any telltale signs of activity, but so far nothing unusual. 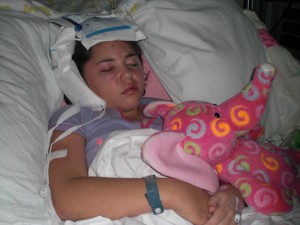